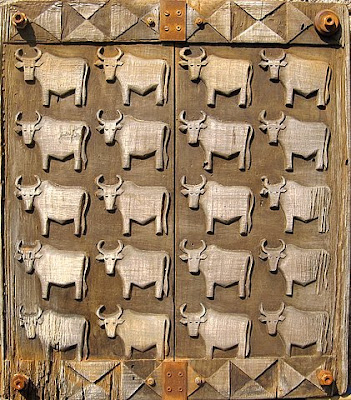 Even with urbanization the ancient tradition of Lobola is still very much alive in Africa. Lobola is a dowry paid by a prospective husband to the family of the bride. Though payment in cows is the old way, new traditions are creeping in and many families are requesting cash payments rather than cattle. 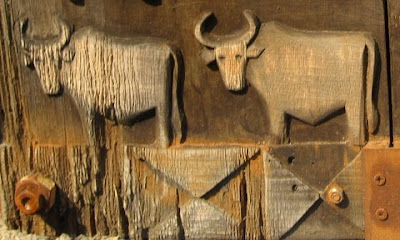 The idea for carving this door came from the story about a young woman my mum met at the Hair Salon. Thembi was a shampooist there and much to the delight of customers she would regail them with stories about the waitressing job she did in the evenings. Though she had been engaged to marry for well over a year the couple didn't seem any closer to setting a wedding date because it was taking so long to raise the money to buy the cows for her Lobola. Thembi was proud of the fact that she was worth 20 cows but she was also exhausted since she was having to waitress in addition to her day job at the salon so as to help her fiance raise the cash.

In modern society one would think that Lobola would be less serious then it used to be but apparently the families of both bride and groom would be mortified if this custom was not adhered to. It is quite a formal affair with the two families meeting to negotiate the bride price, often with tensions running high. A bottle of brandy is usually placed in the middle of the table to relax the two parties. It seems to set the mood for calmer discussions whether the bottle is opened or not. Negotiations take one or two days though I've heard of a case where 6 months later the price had still not been decided upon. 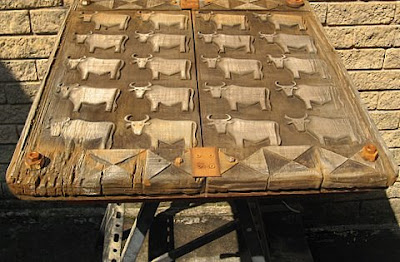 P.S. See if you can find the cow with the crumpled horn.
Posted by ArtPropelled at 1:18 PM