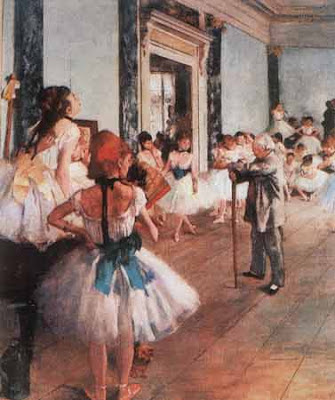 I sometimes amuse myself by paging through art books to spot each artist's breeder ideas. Degas and his dancers. David Hockney and his swimming pools. Hundertwasser and his spirals. Paul Klee and his strata paintings, Joan Miro and his Constellations series. Louise Nevelson and her compartmental sculptures. Apparently an artist has about 4-5 breeder ideas in his lifetime, when one good idea leads to a whole sequence or series. 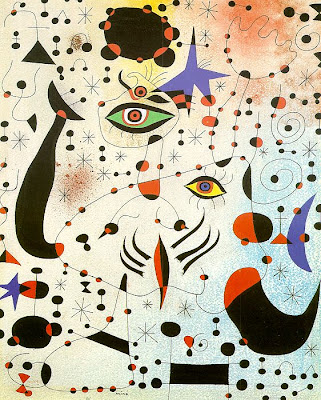 Painting by Joan Miro.
Years ago I read a book called Notes for a Young Painter by Hiram Williams. It must have struck a chord because I wrote out big chunks of it into my quote book.

"The possessor of an idea, possessed by the idea, lives a compulsive obsessed existence. He becomes derelict to all other responsibilities, he is devilish to live with, he is caught up in a kind of rapture others seldom understand and usually find difficult to tolerate. Yet the possessed artist is by and large happy - all suffering and all consumed and all-creative, perceptive, alive and selfishly entombed away from ordinary less fortunate men. But it all ends when the idea ceases to lead and has run its course. Dense black gloom shrouds the once possessed and life indeed seems little worth living. The once possessed finds he is now again an ordinary man. These periods of lost faith in art are due to loss of confidence in oneself. Several people have really given up art entirely during this gloomy period. We are difficult to live with when possessed. Unpossessed we are impossible. But the good idea, the "breeder" idea continues to breed." 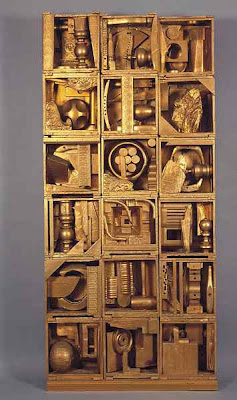 Royal Tide I by Louise Nevelson.

For the past year my carvings have revolved around the idea of Secrets (Tribal Secrets in particular) so I guess this must be one of my breeder ideas. While I'm enjoying creating the series the ideas continue to flow but I do wonder what I will do when the idea has run it's course. It seems to be a typical concern amongst creative people especially those earning a living from their work, that their ideas may dry up. I've learned from experience that the muse strikes sooner or later but of course we would all rather it were sooner than later. 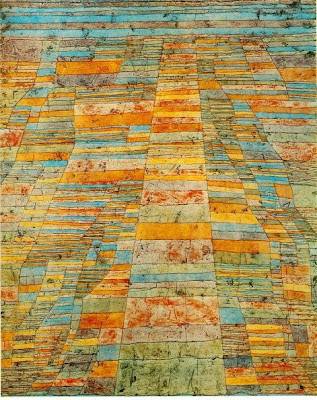 Highway and Byways by Paul Klee
Posted by ArtPropelled at 1:46 PM