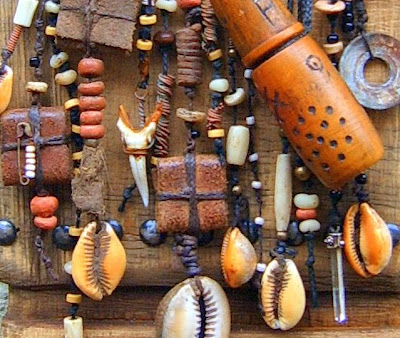 Detail of amulets, talismans and charms from one of my earlier totems.

Amulets, talismans and charms. From snakeskin pouches holding ancient Ethiopian prayer scrolls to Bamana hunters tunics festooned with tiny leather parcels; Christian Crusifixes to the Hand of Fatima; rabbit foot charms to the saint christopher medals so many of us have worn at some stage in our lives; then there are the old favourites such as charm bracelets and the silver charms found in christmas puddings.

There is always some overlap in the meaning of the three words...amulet, charm and talisman. Shiela Paine in her book Amulets says.... "An amulet is a device, the purpose of which is to protect, but by magical and not physical means."

"A charm is something believed to bring good luck, health and happiness. In so doing it might also be expected to protect from bad luck, sickness and misery, but protection is not its primary function."

"A talisman is something thought to be imbued with some magical property. It can both protect, and radiate power, and is often used in ritual." 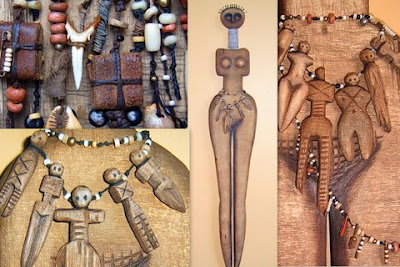 Details from past totems I have carved. The central figure is the Healing Goddess.

This morning I revisited Keith Lobue's website and discovered he has started a blog. 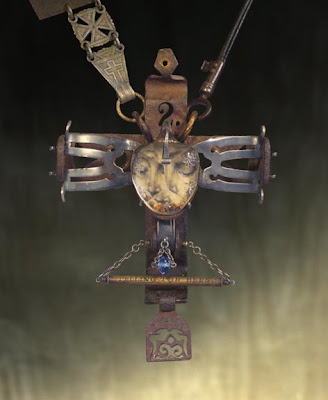 Telling the bees by Keith Lobue (The title refers to the old folk practice of telling the bees of a loved ones death; it was believed that the bees were attendant to the soul of the departed.)

Keith Lobue writes about his work using found objects.
"Many of these objects are centuries old, and they lead me to create works that seem to have been conjured from a rather improbable past. Presenting themselves as scientific instruments or devices of divination, these assemblies appear to have some particular function. Without that utility, however, these pieces are left with a sense of mystery; of questions yet to be answered." 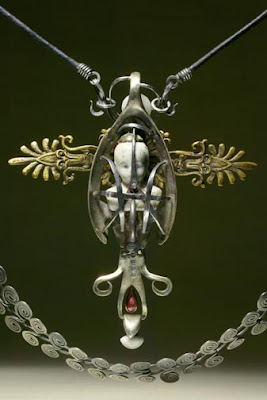 Susan Lenart Kazmer is another artist whose work intrigues me. 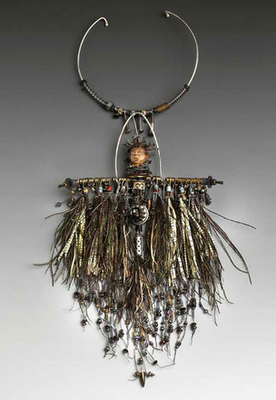 "Recently I have considered another dimension utilizing found objects. Picking up a piece, holding it and contemplating it, I let the object lead the way as to what direction the finished piece will emerge. The magnitude of energy carried with the found object from their previous lives can be seen felt and touched. When you close your eyes and hold the object in your hand you can feel whether the user has enjoyed, neglected, or cherished it. Fear, happiness, struggle, and strength are also feelings embedded in an object. My job as an artist is to take the found object and present it in a new and unexpected way. Combining these energies in recycled objects is indeed creating a contemporary talisman." - Susan Lenart Kazmer 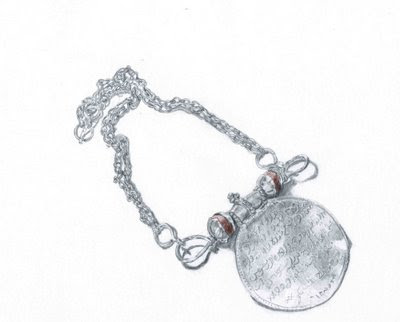 Caroline Soer created this delicate drawing of an Omani necklace in her collection. It is called a kirsh kitab (coin or disc with writing) and was worn by women throughout Northern Oman not only to offer protection, but also to bring gladness and cheerfulness to life. Read the post about it here.

Malaki Blunt creates small sculptures to carry in one's pocket as a reminder of one's connection to the divine. He refers to them as "A talisman, an amulet, a meditative friend". If you happen to wander over to his blog look out for his "Murder of Crows", pocket sculpture. 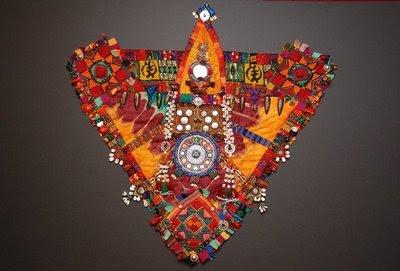 Warrior of light (protection for Obama) by Adriene Cruz

I found this talisman on Fiber Focus a wonderful blog full of textile and fiber art. 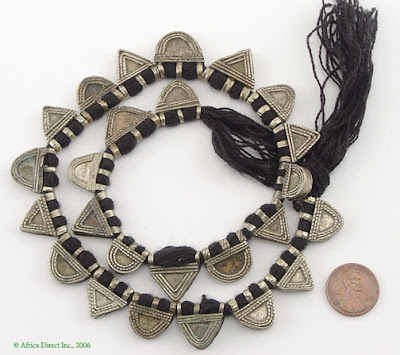 One of the most intriguing aspects of these prayer box beads is that they have probably survived a hundred years of wear and traveled through at least 3 continents. How exciting is that? I wonder what the history behind them is. Who wore them? What is their story?

Posted by ArtPropelled at 4:54 PM