In Africa crows are considered to be guides, protector spirits and messengers.They warn people that danger is approaching. 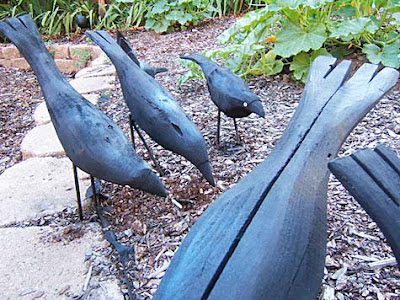 For some reason artists have found crows highly portrayable and a lot of the art portrays them in a humorous light. 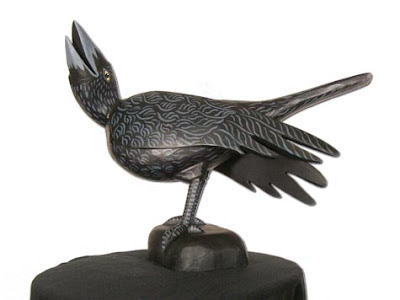 Another delightful crow, carved and handpainted by Allen & Mary Dee

When I was just a kid my brother arrived home with a poor pinioned crow that had been advertised in the Pets for Sale column. The owner couldn't handle him so my brother bought him for me to tame. Crow, however wasn't going to be tamed by anyone. He had the meanest of mean streaks and if he hadn't been pinioned we would have set him free.

We put him in the avery outside the bathroom window where he could chat to all the wild birds in the garden. He mimiced everything including running water, flushing toilets, ringing telephones and a whole repertoire of bird calls. He had us on the hop from morning til night and became extremely excited when we rushed around the garden looking for gushing taps and then back inside to answer the telephone. 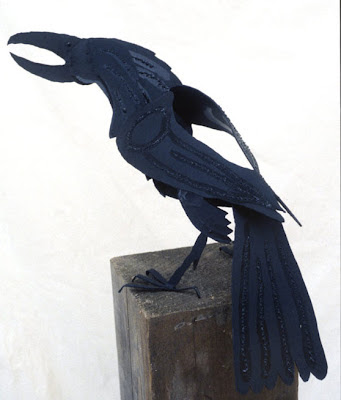 Eventually he managed to entice my Indian Minor (which I had reared from a featherless fledgling) to the wire and before anyone could blink he had yanked poor Zombie's head through the wire and swallowed it whole. That was the end of that...... Crow had to go! 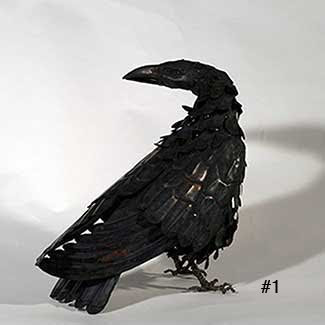 Craven (half crow and half raven) by Rod Bearup

A friend of my husband's owned a pub....and a crow. The crow kept the patrons entertained every evening. She would strut up and down dipping her beak into glasses getting horribly drunk and rather raucous. Her favourite trick was to take an ice block out of a glass when nobody was looking and then rush to the other side of the pub challenging anyone to give chase. When she was sure that nobody was looking she would hide the ice block, either under the corner of a mat or behind a curtain. She then strolled nonchalantly to the other side of the room from where she kept watch, making sure nobody went anywhere near the hiding place. Of course the ice melted and inevitably she couldn't contain herself a minute longer and had to have a little peep at her hidden treasure.....only to find that it had been "stolen". She flew into a rage, jumping up and down flapping her wings much to the delight of all the patrons. 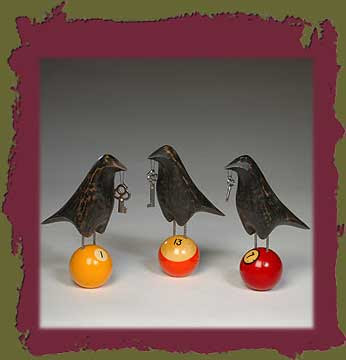 Posted by ArtPropelled at 10:58 AM