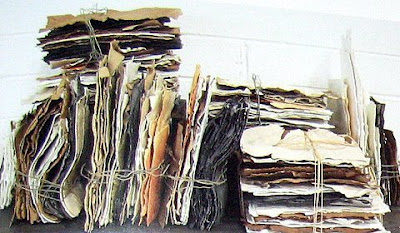 It's been a hectic few weeks rushing back and forth to Durban airport, sending off carvings to several different locations in the States. Up until now I've avoided sending my work overseas because of the astronomical freight charges from South Africa but eventually I decided that if people were prepared to pay the freight charges I should be excited and grateful for this opportunity. With the rate of exchange it's actually not as bad as I thought and after 2 months of research, sourcing the best and most economical way to go about it, I've finally done it! Three of my carvings are in the States as we speak. One is hanging in a beautiful home (photographs sent by the extremely patient and thoughtful buyer) .....and the other two are probably languishing in some bustling Customs Department, rousing the suspicion of beady eyed officials who don't like the look of my worn, weathered, wormy wood. I wish I could reassure them that I created the worn, weathered, wormy effect with my own two hands (at the risk of developing Carpal Tunnel Syndrome too, I might add.) In the mean time I'm feeling extremely mother hennish about my wandering chicks. Hold thumbs that all is well!

It has also been a week of grappling with Flu bugs. The three of us all laid up at the same time, coughing and spluttering and looking like death ....... but today I'm taking interest in my new book, 500 Ceramic Sculptures which arrived on my doorstep via Kalahari. 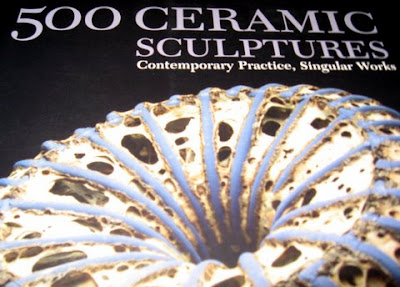 I love the 500 series but I have to say this one is my least favourite. Not sure why....maybe it's just too clever or too contemporary...or too obsessed with genitalia..... (once I noticed one, they were everywhere)....or maybe it's just the Flu. Nevertheless there are some amazing pieces in this book. 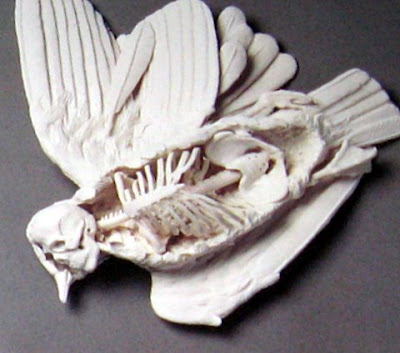 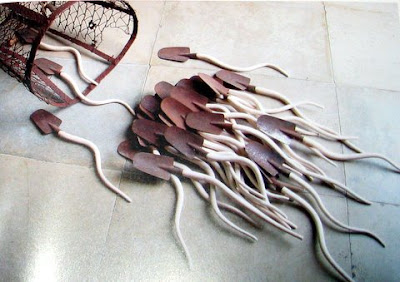 This intriguing piece by Gabriele Putz ..... 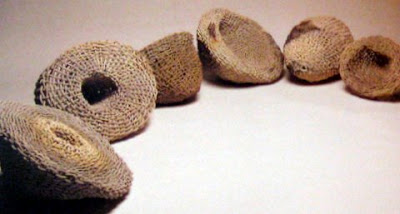 ....and these handwoven stoneware baskets by Phyllis Kudder Sullivan. 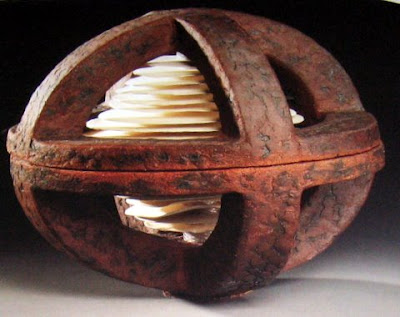 Tomorrow I will be over the Flu and yet another public holiday....ready to get back to work. For some reason I'm expecting to battle with beginning.....but I'm also determined to put in a full day's work...so something has to happen!
Posted by ArtPropelled at 11:30 AM